As mentioned before, a relational database is based on the separation and independence of the the logical and physical representations of the data. This provides enormous flexibility and means you can store the data physically in any way without affecting how the data is presented to the end user. The separation of physical and logical layers means that you can change either layer without affecting the other.

A relational database can be regarded as a set of 2-dimensional tables which are known as "relations" in relational database theory. Each table has rows ("tuples") and columns ("domains"). The relationships between the tables is defined by one table having a column with the same meaning (but not necessarily value) as a column in another table.
For example consider a database with just 2 tables :
emp(id number
,name      varchar2(30)
,job_title varchar2(20)
,dept_id   number)

holding department information
There is an implied relationship between these tables because emp has a column called dept_id which is the same as the id column in dept. In Oracle this is usually implemented by what's called a foreign-key relationship which prevents values being stored that are not present in the referenced table.
Relational databases obtain their flexibility from being based on set theory (also known as relational calculus) which enables sets or relations to be combined in various ways, including:
The intersection or join between 2 sets (in this case, table) produces only those elements that exist in both sets.

The union produces the sum of the tables - meaning all records in Emp and all records in Dept. and this may be with or without duplicates.
Let's use the following data to provide specific examples:

The join of Emp. and Dept. on the department id would produce the following result:

The union of Emp. and Dept. would produce the following result:

The union operator is only allowed when the number and data types of the columns in the 2 sets are the same. It is not normally be used to combine sub sections from one or more tables rather than entire tables.
There are other operators and variations but there isn't the space or the time to provide full details in this short Oracle tutorial.
The later versions of Oracle (Oracle 8, Oracle 8i, Oracle 9i and Oracle 10g) are support both relational and object-oriented features. The relational features are more prominent at the moment, but this is beginning to change. In this context an object has both attributes and methods (programs stored with the object that performs a certain action or task) and in a true object-oriented database would belong to a class and would allow multilevel inheritance.

A Relationship is defined as “An association among different Entity Sets”. 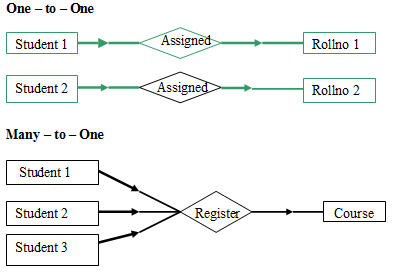 Database Models are broadly classified into two categories. They are:

Alter Table
AND Operator
AND OR Combination
Arithmetic Operator

IF(NESTED)
IF CONDITION
IF WITH TABLE
IN
INDEX
INSERT
INTERSECT